When talking about advanced technology in general and Internet of Things (IoT) in particular the first aspects that come to mind are things such as gleaming manufacturing production lines, industrial IoT solutions, critical infrastructure facilities, and consumer products for the home or fitness. It is rare that agriculture or farming gets included. Yet IoT is already having an impact within the agricultural sector, helping to improve productivity and yields.

While food shortages can often be more of a food distribution problem than an absolute shortage of production per se, increases in agricultural food production are going to be essential in the years ahead. The United Nations’ World Population Prospects 2019 predicts that global population will rise from an estimated 7.7 billion people in 2019 to c.8.5 billion in 2030, 9.7 billion in 2050 and 10.9 billion by the end of the century, increasing the demand for food. This is combined with likely increased levels of prosperity and reductions in poverty, which has been shown before to always lead to increases in per capita food consumption as well as, importantly, changes in the food stuffs consumed. As the UN report puts it, “continued rapid population growth presents challenges for sustainable development”.

First off, it’s important to say that any predictions of a Malthusian population crunch are likely to be way off the mark. In recent history, the agricultural sector has shown itself able to substantially increase levels of production, for example through the Green Revolution in the 1950s and 1960s that witnessed the use of new disease resistance high-yield varieties of wheat, rice and other crops.

But to ensure that food production can keep up with demand, a range of responses will be needed. Some of will be knowledge-based, others practice-based: for example, with knowledge of new farming techniques being spread, notably in developing countries; with increased used of hardier and more resistance varieties of crops; and with increased access to tools that enable greater productivity.

In some cases, this access to tools can mean access to farming equipment such as tractors or irrigation equipment. On others, it can include what is being called ‘smart farming’, ‘precision farming’, or ‘smart agriculture’.

The UN Food and Agriculture Organization summarizes smart farming as: “a farming management concept using modern technology to increase the quantity and quality of agricultural products. Farmers in the 21st century have access to GPS, soil scanning, data management, and Internet of Things technologies. By precisely measuring variations within a field and adapting the strategy accordingly, farmers can greatly increase the effectiveness of pesticides and fertilizers, and use them more selectively. Similarly, using Smart Farming techniques, farmers can better monitor the needs of individual animals and adjust their nutrition correspondingly, thereby preventing disease and enhancing herd health”.

In essence, smart farming is the deployment of advanced technology and IoT in agriculture.

The benefits that can be gained from this are manifold. There are the afore mentioned increases in production and greater effectiveness of agricultural inputs, such as fertilizer. But there are also major environmental benefits to be gained through the more sustainable use of water, energy, feed and the soil. The commercial and economic benefits are also significant. An Irish Government initiative that promotes smart farming states that, on participating farms, it averages EUR 6,300 in cost savings per farm and ways to reduce greenhouse gas emissions by 10%.

Using IoT and technology in agriculture

Despite the images that many may have of agriculture being technologically limited, this could hardly be further from the truth. Advanced technology and IoT have been rolling out within the sector in line with the developments elsewhere. One of the first studies to look at IoT in agriculture by Beecham Research identified several aspects where in which these could be used:

Specific areas where IoT and related technologies are being rolled out within include:

There are a wide range of uses within each of these areas. For examples, drones are being used for crop spraying as well as providing remote monitoring of crop growth. DroneFly, a US-based drone supplier, provides a multispectral imagery drone for agricultural use that is enabled for sunlight detection; it further estimates that fertilizer can be delivered approximately 40-60 times faster than through traditional methods.

Some of the most important IoT solutions and tools involve observation and diagnostics. Sensing IoT solutions can be used, for example, to record and monitor conditional data from crops, soil, meteorological conditions, or livestock. As with IoT solutions in other fields, this data can then be integrated and diagnosed in order for automated decisions to be taken or alerts raised. All of this reduces the workload on the farmer while improving reaction time.

Although public awareness of IoT solutions within smart agriculture is less than those provided for industrial IoT solutions or within the consumer environment, the range of IoT tools, systems and applications that are being deployed is rapidly growing and will make an important contribution to the future farming and food needs of us all. 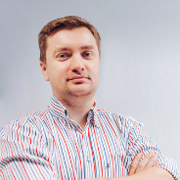 Under Sergei's leadership, the company has grown and consolidated its position as a leader in IoT, AR, and VR development. Since 2001, Sergei has been a strong strategic thinker and an inspiring leader. Holding a degree in international economics he utilizes his knowledge to develop HQSoftware as a world-class service vendor.