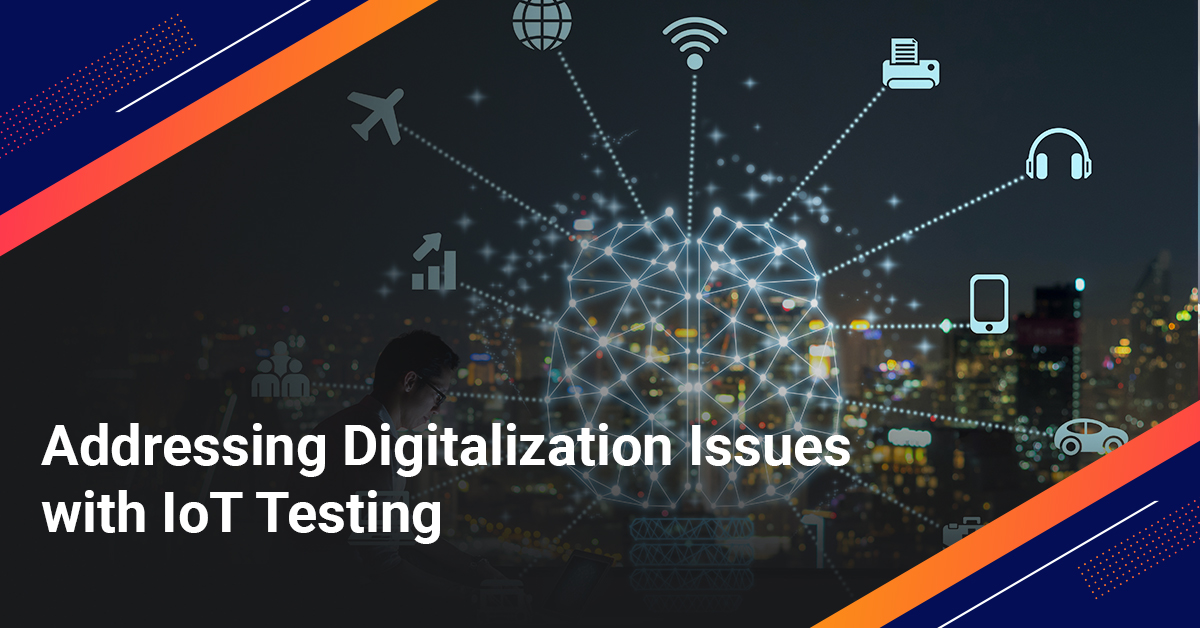 The internet-based global digital landscape comprises a plethora of complex software and hardware systems spread on-premise and across the cloud. Also, there are software applications within embedded devices that are connected to the internet a la the Internet of Things (IoT). When we envision the future of the digital world, the IoT, along with other technologies, seems to be the harbinger. It has the potential to usher in a world driven by smart technologies to make lives more convenient and qualitatively superior. According to statistics, the number of IoT devices is likely to surpass 25.4 billion by 2030. Also, the IoT can generate an economic value ranging from $4 - $11 trillion by 2025 (Source: dataprot.net). The data shows how the Internet of Things (IoT) is going to define the digitized future of the world.

However, notwithstanding the tremendous potential of IoT as a technology to drive the next digital revolution, it offers several challenges as well. IoT testing has become critical given that the success of the IoT ecosystem depends on the seamless functioning of its associated software and hardware systems. Let us discuss the challenges in some detail in the below-mentioned segment:

The Internet of Things QA testing ensures IoT devices function safely and reliably. However, this type of testing has a host of challenges to grapple with, as mentioned below:

Testing in an omnichannel environment: The IoT ecosystem comprises various devices, platforms, and systems spread across on-premise and cloud environments. To ensure effective utilization of such systems, IoT testing should be conducted rigorously. Since IoT devices generate data at high velocity, their veracity needs to be ensured in real-time. However, this can be easier said than done, for the data generated is mostly unstructured. Also, IoT testing services need to test several devices with varying capabilities across platforms. Hence, creating a real IoT environment for testing can be a challenge, for there are many devices that require testing on the platform they operate upon. Besides, there are device upgrades in terms of software and firmware, which need to be considered by IoT device testing solutions for effective test outcomes. Thus, cross testing for IoT devices in an omnichannel environment comprising various versions and platforms can be an uphill task.

Cybersecurity risks: Given that IoT devices generate a large quantum of data (structured and unstructured), they may be vulnerable to hacking. Even so, statistics suggest that around seventy percent of IoT devices have security-related issues. Therefore, such devices should be subjected to rigorous IoT security testing. It involves identifying vulnerabilities in the architecture of devices using IoT penetration testing and fixing them. Testers should focus on checking and verifying the devices’ passwords and authorization policies.

Different protocols of IoT communications: IoT devices follow a range of protocols when it comes to communicating among themselves and with the server. These may include AMPQ, XMPP, CoAP, and MQTT. Besides, various components in an IoT ecosystem can use different protocols for communication. Hence, such components need to be tested over communication protocols to preclude functional and security risks. For instance, when embedded software within devices runs on low memory due to higher loading requests, they balance load requests among components using an IoT gateway. Testing IoT applications can verify the load balance among different components, thereby ensuring their smooth functioning.

Lack of standardization: Creating standards for IoT devices can be a challenge across four levels - application, business model, connectivity, and platform. The lack of a uniform standard across the IoT landscape makes it a difficult case for testers. This is because different companies build devices with competing and often conflicting standards. The common IoT testing approach is based on the intended use of the system or the use case. The best way to wriggle out of the situation is to establish uniform standardization across the above-mentioned levels.

Battery life: A large number of IoT devices are powered by batteries, which need to function at their optimum at all times. To ensure IoT devices are energy efficient, they need to have low-power components. Thus, the battery needs to be tested under different conditions and scenarios to maximize the life of such devices. Also, testers should check whether the device is able to report the low-battery status to the cloud platform properly.

The quality of an IoT ecosystem can only be ensured if the above-mentioned challenges are addressed by stringently testing IoT applications. Business enterprises building and utilizing IoT devices can look at various benefits by implementing stringent IoT testing. These include driving innovation and speeding up risk-free initiatives; facilitating time-to-market; improving interoperability; and achieving a higher ROI.