The Internet of Things (IoT) has undoubtedly been identified as the biggest surprise and gift of the digitalized world. It has rightly been described as a communication revolution in which the internet is connected with millions of computing devices, home appliances, digital machines, sensors and many more. It is an ultra-modern technology that does not require the support of human and computer interaction, but the data gets transmitted easily through unique identifiers.

As such the Internet of Things (IoT) can establish the connection with the smallest of devices such as a microwave oven or even a four-wheeler. It’s an astonishing fact, but it is true. And with the numbers of smart gadgets on the roll, the global arena is going to view an enormous growth in connections throughout; all thanks to the new IoT technology.

One of the stats reveal that about 26 billion devices are expected to get connected with the Internet of Things (IoT) by 2020. Moreover, it has offered viable opportunities for the business organizations.

But of late, there have been a few concerns regarding the IoT especially those related to security threats and issues. It is shocking to know that even the simple home appliances can act as spy agents. According to the survey by the Forbes, about 96% of the security professionals are responding to the breaches, which is expected to hike in the future.

Can Internet of Things (IoT) Become Victim of Malicious Attack
Yes, the Internet of Things can be easily victimized and so the security of the IoT becomes paramount under these circumstances. The world has already come under the scanner with some major cyber threats such as the WannaCry Ransomware, NotPetya etc. where the hackers were successful in millions of computer systems across the globe jeopardizing the entire internet networking.

However, the cyber security experts are much apprehended over the fact that firms, internet users or neither the IoT manufactures are serious about the security of devices connected with the internet.

In fact, the researchers have warned about more security breaches and advised to remain utterly cautious. The hackers have become hyper active and technically advanced and can easily target their victims with the modernized gadgets and tools. They can monitor the activities of the organizations and attack on the confidential data and documents with a small chip or by changing the settings of the camera.

Nowadays not even the government websites and agencies are getting literally spared. Often the governments of different counties accuse each other for hacking and stealing the secret information. The malignant attackers are also making use of the cloud based technology to give vent to their unethical practices.

The unlawful agents can target their victims not only through smartphones, laptops and tablets but also through Smartwatches, which is becoming a preferred device for the individuals. Thorough these cool devices they can keep an eye on all your activities and even get those important data related to health and banking details.

Why IoT becomes Unsafe at Times
Although Internet of Things have been a blessing for the users, but at times they can penetrate into an unsafe area and that is when they fall into a trap. I have mentioned that most of the people do not take the security aspect seriously. They commit some errors, which later on proves costly.

Creating a Weak Password
One has to be very careful when creating a user name and password for any account. People don’t realize the seriousness and often make weak password such as their name, mobile number, date of birth, residential address. 12345 and so on. It becomes a cakewalk for the hackers to decode it and hence their data gets leaked.

Not Locking the Device
Every device has a lock pin in the form of password, drawing pattern or the numerical pin like the ATM. But if the users don’t lock their IoT devices it becomes highly risky and anybody can get through their smartphones or tablets to know the details.

Not Updating the Software
The IoT connected devices also become the targets of the hackers because the user does not update the software and the concerned apps on regular basis or even on receiving the notifications from the authorities. This increases the threats related to privacy protection, security protocol and vulnerability patches.

Not Storing the Data Properly
In case the user shows some lethargic attitude when storing or sharing his private and confidential data with others, he becomes an easy prey to all kinds of malicious activities. This becomes very common in cases related to banking details such as card information, ATM pin number, internet banking password and so on.

Not Using VPN for Public Wi-Fi
When people are using public Wi-Fi they are not taking the correct security measures such as VPN which makes their data unsecure. Public Wi-Fi are always open and thus the most untrusted networks and so lack of encryption can land you into an area of difficulties.

Steps to Strengthen the Security of IoT
Now after having some knowledge on the loose ends associated with the security of the IoT, it’s time to tighten the screws and provide a safer and securer environment to your devices.

Know the Points of Entry
You should always be aware of the fact that the people resorting to unethical practices choose an entry point from where they penetrate the data of your IoT device. So, it is recommended to identify those points and seal them.

Such points can usually be the applications containing malware, virus effected software, easy access areas or computing storage and other holes. So, you have to keep a close eye on such entry points to make it difficult for entering into the restricted zone.

Store the Data in More Robust Environment
The private data should be stored and secured in a more protective shell that cannot be reached with ease. It must be stored at a place which is not easy to locate in the device and should be backed by a very strong password. If possible try changing the password at regular intervals to keep the hacker guessing.

Choose Strong Password and Good Anti-Virus Software
You should essentially make it a point to always create a strong password whenever building an account. The password should be very ambiguous and unusual. Usually the strong password comprises of eight to ten characters in which you should include at least one uppercase letter, a lower letter, a special character and a number. Never keep passwords starting with your name or email id and mobile number.

In addition you also need to install a good antivirus software that can protect your computer or IoT device from the external threats and malicious software. Always keep your antivirus updated and purchase or download it again once the license expires.

Testing the Website, App or Software before launch
Testing is one of the most important tasks if in any manner you are related to the IT industry. Whether you are a website designer, a mobile app developer or a software architect, you have to necessarily test the application before you are releasing it into the market.

The testing of the software or the app will not only confirm the functionality but also you have to test it on various security parameters so that there is no lapse from your side.

Provide Authentication on Various Levels
If you are asking the user to sign-in into the account, make sure you offer multi-level authentication before allowing him to access the account. There are many sites such as Gmail or when creating an account for online banking, railway reservation where you have to go through two windows. The first where you will in your personal details and the second is when you to write the security code sent to your email id or mobile number.

Use Public Wi-Fi very cautiously
As said earlier public Wi-Fi is always regarded unsecure as there is no authentic protection in the open environment. So, when you are browsing internet using a public Wi-Fi, you need to extra cautious. It should be used with always keeping the VPN option on.

Always Install Up-to Date Software and Apps
Keep your device completely up-to date with the latest software and application updates. Outdated software does not the capacity to fight with the cyber threats and hence it will always be risk involved.

Conclusion
We can see here that there is always the two sides of the coin. On one hand, we have the multiple benefits of Internet of Things (IoT), which is really bringing the world closer through its connectivity, but on the other hand, the security concern still prevails to be the topmost preference.

The security of the Internet of Things cannot be compromised at any juncture and hence all optimal steps need to be ensured to protect the most confidential and personal data from getting into the hands of people who can misuse it and create some big trouble. Cybercrime is a major menace for the society and it must be uprooted. 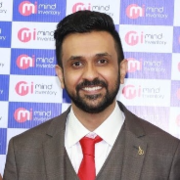 Mehul Rajput is a CEO of Mindinventory, a leading mobile app development company specialized in android and iOS app development. He does blogging as hobby and love to write on mobile technologies and mobile apps.