The topic of IoT and farming keeps coming up.

Last month Steve Lohr of the New York Times wrote a fantastic piece on The Internet of Things and the Future of Farming. His colleague Quentin Hardy wrote a similar piece, albeit with a big data slant, in November 2014. If you have not yet read either article, I suggest you take the time to do so and also watch the video of IoT at work at a modern farm. It’s one of the better IoT case studies I’ve come across and shows real and practical applications and results.

Both stories highlight Tom Farms, a multi-generation, family owned farm in North Indiana. The Toms won’t be setting up a stand at your local farmers market to hawk their goods. With over 19,000 acres they are feeding a nice portion of America and conduct farming on an industrial scale producing shipments of more than 30 million pounds of seed corn, 100 million pounds of corn, and 13 million pounds of soybeans each year.

As the video points out, technology, data and connectivity have gotten them to this scale. After the farm crisis of the 1980s, they double-downed and bought more land from other struggling farmers. Along the way they were proactive in researching and developing new production technologies - everything from sensors on the combine, GPS data, self-driving tractors, and apps for irrigation on an iPhone. 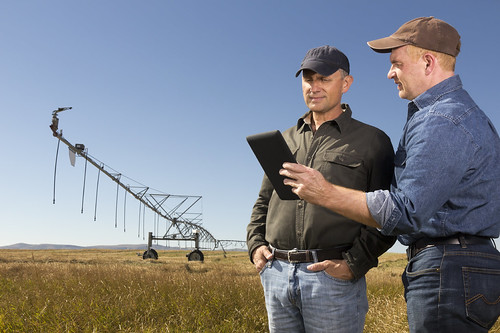 All this technology is taking farming to a new level, in what is know as Precision Agriculture. The holy grail of precision agriculture is to optimize returns on inputs while preserving resources. The most common use of of modern farming is used for guiding tractors with GPS. But what other technologies are out there?

The new crop from all of these technologies is data.

This changes the economics for farmers making them not just traders in crops, but in data, potentially giving them an edge against larger competitors that benefit from economies of scale (to compete against giants like Tom Farms).

With the amount of venture investment in so-called agtech start-ups reaching $2.06 billion in the first half of this year there will be plenty of bytes in every bushel.