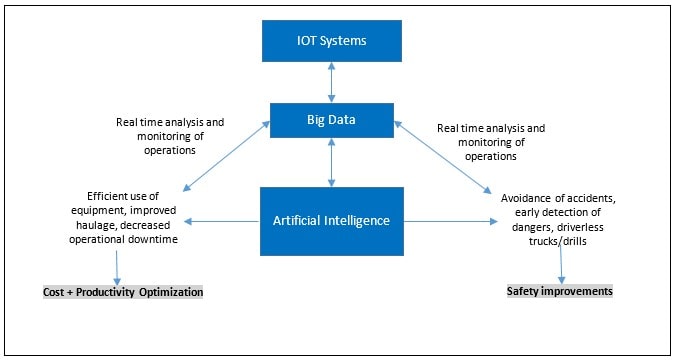 Flowchart of IoT in Mining

Introduction – Internet of Things in Mining

The Internet of things (IoT) is the extension of Internet connectivity into physical devices and everyday objects. Embedded with electronics, Internet connectivity, and other forms of hardware; these devices can communicate and interact with others over the Internet, and they can be remotely monitored and controlled. In the mining industry, IoT is used as a means of achieving cost and productivity optimization, improving safety measures and developing their artificial intelligence needs.

IoT in the Mining Industry

Considering the numerous incentives it brings, many large mining companies are planning and evaluating ways to start their digital journey and digitalization in mining industry to manage day-to-day mining operations. For instance:

Another benefit of IoT in the mining industry is its role as the underlying system facilitating the use of Artificial Intelligence (AI). From exploration to processing and transportation, AI enhances the power of IoT solutions as a means of streamlining operations, reducing costs, and improving safety within the mining industry.

Using vast amounts of data inputs, such as drilling reports and geological surveys, AI and machine learning can make predictions and provide recommendations on exploration, resulting in a more efficient process with higher-yield results.

AI-powered predictive models also enable mining companies to improve their metals processing methods through more accurate and less environmentally damaging techniques. AI can be used for the automation of trucks and drills, which offers significant cost and safety benefits.

Challenges for IoT in Mining

Although there are benefits of IoT in the mining industry, implementation of IoT in mining operations has faced many challenges in the past.

Mining companies have overcome the challenge of connectivity by implementing more reliable connectivity methods and data-processing strategies to collect, transfer and present mission critical data for analysis. Satellite communications can play a critical role in transferring data back to control centers to provide a complete picture of mission critical metrics. Mining companies worked with trusted IoT satellite connectivity specialists such as ‘Inmarsat’ and their partner eco-systems to ensure they extracted and analyzed their data effectively.

As mining operations become more connected, they will also become more vulnerable to hacking, which will require additional investment into security systems.

Following a data breach at Goldcorp in 2016, that disproved the previous industry mentality that miners are not typically targets, 10 mining companies established the Mining and Metals Information Sharing and Analysis Centre (MM-ISAC) to share cyber threats among peers in April 2017.

In March 2019, one of the largest aluminum producers in the world, Norsk Hydro, suffered an extensive cyber-attack, which led to the company isolating all plants and operations as well as switching to manual operations and procedures. Several of its plants suffered temporary production stoppages as a result. Mining companies have realized the importance of digital security and are investing in new security technologies.

Digitalization of Mining Industry - Road Ahead

Many mining companies have realized the benefits of digitalization in their mines and have taken steps to implement them. There are four themes that are expected to be central to the digitalization of the mining industry over the next decade are listed below: 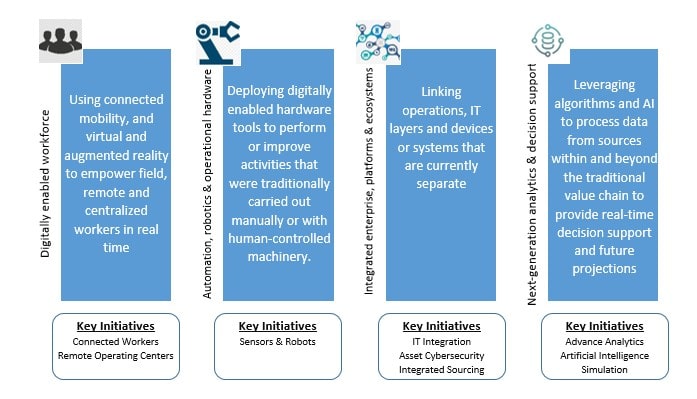 The world can expect to witness prominent developments from the mining industry to make it more sustainable. There are some unfavorable impacts of mining on communities, ecosystems, and other surroundings as well. With the intention to minimize them, the power of data is being harnessed through different IoT statements. Overall, IoT helps the mining industry shift towards resource extraction, keeping in mind a particular time frame and footprint that is essential.