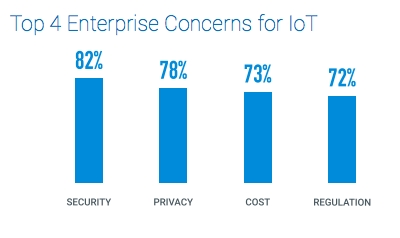 Read more…
A recent study by Cisco suggests that 75% of IoT initiatives will fail. However, there is growing pressure to invest in IoT. Ensuring the success of enterprise IoT initiatives is definitely not easy given technology immaturity, culture obstacles as well as well as the challenges of traditional organizational structure. So put the odds of success back into your favor using a customer-centric, integrated team (IT) philosophy.
Read more… An early theme of digital transformation was the notion of selling services rather than products. A contract with the “thing maker” to circulate cooling fluid throughout my factory rather than a purchase order for me to buy the pumps and filters needed to do it myself, for example. The contract lets me focus on creating products for my customers rather than maintaining the machines making this possible. I don’t want to spend time on the process (pumps and filters), I just need the outcome (properly cooled machines) in the least distracting way possible to my core business of producing goods, medicine, energy, etc. The contract lets you, purveyor of the connected pumps and filters, build a closer relationship with me, streamline your business, and avoid competing in an increasingly commoditized space.

The fundamental shift happening today goes beyond providing guaranteed services rather than just hardware. Ensuring my lights stay on rather than selling me light bulbs solved your commodity hardware problem, but over time service offerings will face similar pressure as your competitors follow your connected product path and undergo digital transformations of their own. Your long term return on investment in IoT depends on more than keeping my lights on and water flowing. The value your IoT system creates for you depends on your IoT system’s ability to generate more business for me. There’s no such thing as a cheaper “good enough” replacement part when it comes to generating new revenue.

In healthcare for example, when your IoT system enables me to perform procedures in 24% less time, my clinics can perform 24% more procedures each day, increasing my revenue by 24% and delivering a 24% better patient experience. That’s what I’m looking for when I’m buying medical equipment. Depending on my corporate agility, the adoption and rollout of your connected machines may be a phased approach, following a progression of business outcomes. Asset Management means knowing the status of each device at all times and controlling them accordingly. This first step helps me see the potential value of incoming data and better understand my current utilization. Workflow Integration is connecting this information with my enterprise systems, which enables Predictive Maintenance and automatically alerts service technicians when a machine shows signs of impending failure. Where everything comes together and bonds me securely to your connected product service is Yield Optimization.

At this point your IoT system is collecting data from machines in my facilities as well as external data like weather and information from my other enterprise systems, correlating this information and uncovering patterns and ways for me to achieve more with less. Your “things” are now more than hardware installed in my facility performing physical tasks. They’re active components in a new System of Intelligence engaged in a loop of continuous learning and improvement.

This is true digital transformation, the creation of business value out of data collected and processed by your IoT solution.

To paraphrase Geoffrey Moore, smart “thing makers” are investing in IoT solutions for their customers today in order to generate more revenue for themselves tomorrow. Traditional hardware vendors are being commoditized and replaced whenever a cheaper “good enough” option comes along. To thrive in the long run, your value must be “sticky”, embedded in your customer’s business, providing benefit to their customers as well. The “things” you sell now simply enable your customers to run their basic operations. Whenever a part breaks, customers make a decision to order a new one either from you or a competitor. How differentiated is your equipment from the rest of the market? Your business is constantly at risk.

What we’re seeing as a result are “thing makers” creating smart systems that empower their customers to not just operate, but to *optimize* their operations. These devices still perform their physical functions as before, but also collect and share a stream of data about their status and conditions in the world around them. It’s the data they produce, and the insights your system derives from this data, that enable your organization to offer far more valuable products and services to your customers that are not so easily replaced.

If you know the state of your machines at all times, you can build predictive maintenance and service models enabling guaranteed uptime and automatic replenishment. If your equipment never breaks or runs empty, your customer is unlikely to replace it with a competitor’s version.

If your products provide not just lighting and temperature control but also insights correlating usage patterns with time, weather, and utility data that reduce your customer’s costs, you can sell them this information for a percentage of these savings.

It’s the future. Your connected product system is part of your customer’s operating procedures, continuously generating insights for maximizing productivity. Improved asset utilization, faster turnarounds, synchronized workflows, and more. Smoother operations and reliable performance deliver better experiences for their customers, further expanding your customer’s business, because of your IoT solution. You don’t just sell “things.” You sell outcomes, which is what your customers really wanted in the first place.