The head is surely the most complex group of organs in the human body, but also the most delicate. The assessment and prevention of risks in the workplace remains the first priority approach to avoid accidents or reduce the number of serious injuries to the head. This is why wearing a hard hat in an industrial working environment is often required by law and helps to avoid serious accidents.

This article will give you an overview of how to detect that the wearing of a helmet is well respected by all workers using a machine learning object detection model.

For this project, we have been using:

Before we get started, here are some insights of the benefits / drawbacks of using a public dataset versus collecting your own.

Using a public dataset is a nice-to-have to start developing your application quickly, validate your idea and check the first results. But we often get disappointed with the results when testing on your own data and in real conditions. As such, for very specific applications, you might spend much more time trying to tweak an open dataset rather than collecting your own. Also, remember to always make sure that the license suits your needs when using a dataset you found online.

On the other hand, collecting your own dataset can take a lot of time, it is a repetitive task and most of the time annoying. But, it gives the possibility to collect data that will be as close as possible to your real life application, with the same lighting conditions, the same camera or the same angle for example. Therefore, your accuracy in your real conditions will be much higher.

Using only custom data can indeed work well in your environment but it might not give the same accuracy in another environment, thus generalization is harder.

The dataset which has been used for this project is a mix of open data, supplemented by custom data.

At first, we tried to train our model only using a small portion of this public dataset: 176 items in the training set and 57 items in the test set where we took only images containing a bounding box bigger than 130 pixels, we will see later why.

If you go through the public dataset, you can see that the entire dataset is strongly missing some “head” data samples. The dataset is therefore considered as imbalanced.

Several techniques exist to rebalance a dataset, here, we will add new images from Flicker-Faces-HQ (FFHQ). These images do not have bounding boxes but drawing them can be done easily in the Edge Impulse Studio. You can directly import them using the uploader portal. Once your data has been uploaded, just draw boxes around the heads and give it a label as below:

Now that the dataset is more balanced, with both images and bounding boxes of hard hats and heads, we can create an impulse, which is a mix of digital signal processing (DSP) blocks and training blocks:

In this particular object detection use case, the DSP block will resize an image to fit the 320x320 pixels needed for the training block and extract meaningful features for the Neural Network. Although the extracted features don’t show a clear separation between the classes, we can start distinguishing some clusters: 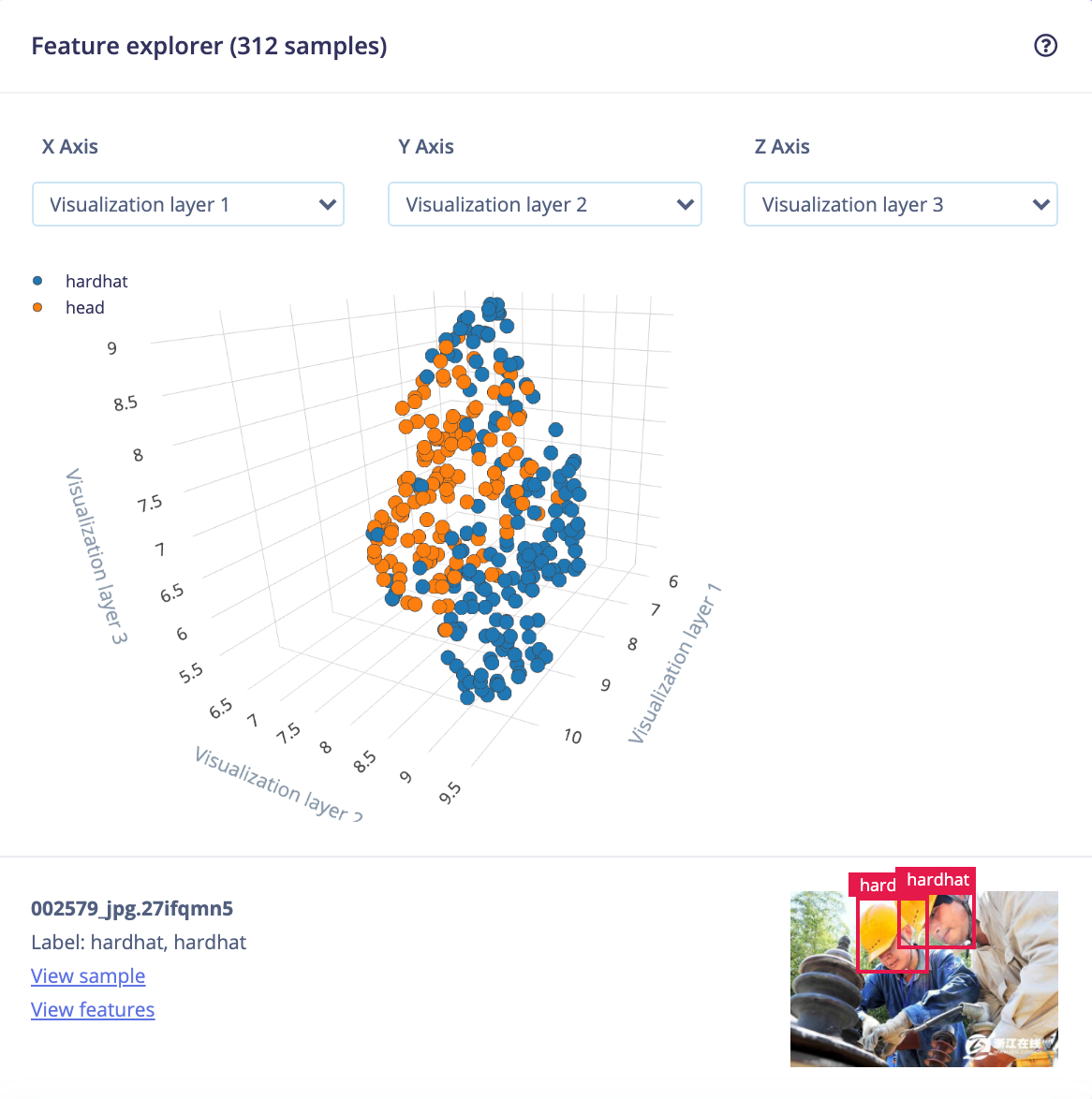 To train the model, we selected the Object Detection training block, which fine tunes a pre-trained object detection model on your data. It gives a good performance even with relatively small image datasets. This object detection learning block relies on MobileNetV2 SSD FPN-Lite 320x320.

According to Daniel Situnayake, co-author of the TinyML book and founding TinyML engineer at Edge Impulse, this model “works much better for larger objects—if the object takes up more space in the frame it’s more likely to be correctly classified.” This has been one of the reason why we got rid of the images containing the smallest bounding boxes in our import script.

This accuracy is not satisfying, and it tends to have trouble detecting the right objects in real conditions:

On the second iteration of this project, we have gone through the process of collecting some of our own data. A very useful and handy way to collect some custom data is using our mobile phone. You can also perform this step with the same camera you will be using in your factory or your construction site, this will be even closer to the real condition and therefore work best with your use case. In our case, we have been using a white hard hat when collecting data. For example, if your company uses yellow ones, consider collecting your data with the same hard hats.

Once the data has been acquired, go through the labeling process again and retrain your model. We obtain a model that is slightly more accurate when looking at the training performances. However, in real conditions, the model works far better than the previous one.

Finally, to deploy your model on yourA Rasberry Pi, NVIDIA Jetson Nano or your Intel-based Macbook, just follow the instructions provided in the links. The command line interface `edge-impulse-linux-runner` will create a lightweight web interface where you can see the results.

Note that the inference is run locally and you do not need any internet connection to detect your objects. Last but not least, the trained models and the inference SDK are open source. You can use it, modify it and integrate it to a broader application matching specifically to your needs such as stopping a machine when a head is detected for more than 10 seconds.

This project has been publicly released, feel free to have a look at it on Edge Impulse studio, clone the project and go through every steps to get a better understanding: https://studio.edgeimpulse.com/public/34898/latest

The essence of this use case is, Edge Impulse allows with very little effort to develop industry grade solutions in the health and safety context. Now this can be embedded in bigger industrial control and automation systems with a consistent and stringent focus on machine operations linked to H&S complaint measures. Pre-training models, which later can be easily retrained in the final industrial context as a step of “calibration,” makes this a customizable solution for your next project. 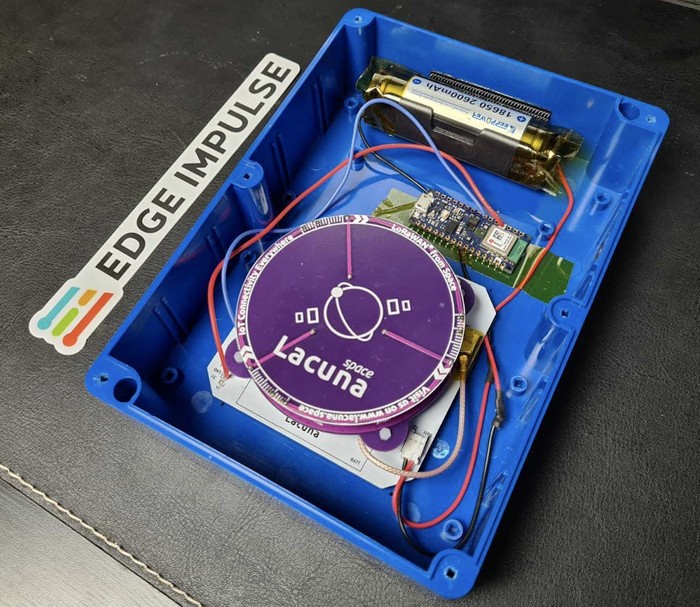 Edge Impulse has joined 1% for Planet, pledging to donate 1% of our revenue to support nonprofit organizations focused on the environment. To complement this effort we launched the ElephantEdge competition, aiming to create the world’s best elephant tracking device to protect elephant populations that would otherwise be impacted by poaching. In this similar vein, this blog will detail how Lacuna Space, Edge Impulse, a microcontroller and LoraWAN can promote the conservation of endangered species by monitoring bird calls in remote areas.

Over the past years, The Things Networks has worked around the democratization of the Internet of Things, building a global and crowdsourced LoraWAN network carried by the thousands of users operating their own gateways worldwide. Thanks to Lacuna Space’ satellites constellation, the network coverage goes one step further. Lacuna Space uses LEO (Low-Earth Orbit) satellites to provide LoRaWAN coverage at any point around the globe. Messages received by satellites are then routed to ground stations and forwarded to LoRaWAN service providers such as TTN. This technology can benefit several industries and applications: tracking a vessel not only in harbors but across the oceans, monitoring endangered species in remote areas. All that with only 25mW power (ISM band limit) to send a message to the satellite. This is truly amazing!

Most of these devices are typically simple, just sending a single temperature value, or other sensor reading, to the satellite - but with machine learning we can track much more: what devices hear, see, or feel. In this blog post we'll take you through the process of deploying a bird sound classification project using an Arduino Nano 33 BLE Sense board and a Lacuna Space LS200 development kit. The inferencing results are then sent to a TTN application.

Note: Access to the Lacuna Space program and dev kit is closed group at the moment. Get in touch with Lacuna Space for hardware and software access. The technical details to configure your Arduino sketch and TTN application are available in our GitHub repository.

Our bird sound model classifies house sparrow and rose-ringed parakeet species with a 92% accuracy. You can clone our public project or make your own classification model following our different tutorials such as Recognize sounds from audio or Continuous Motion Recognition. 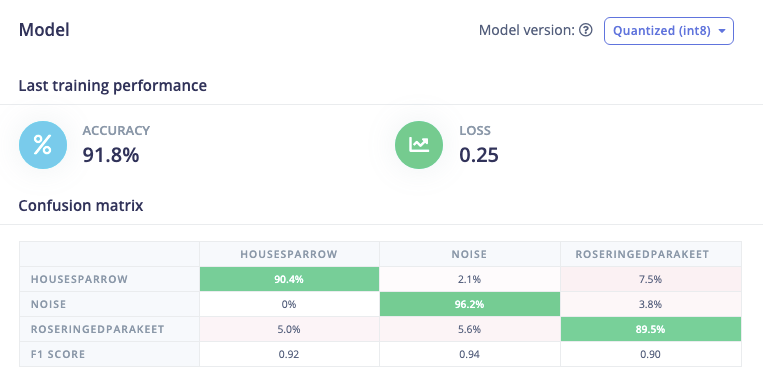 Once you have trained your model, head to the Deployment section, select the Arduino library and Build it. 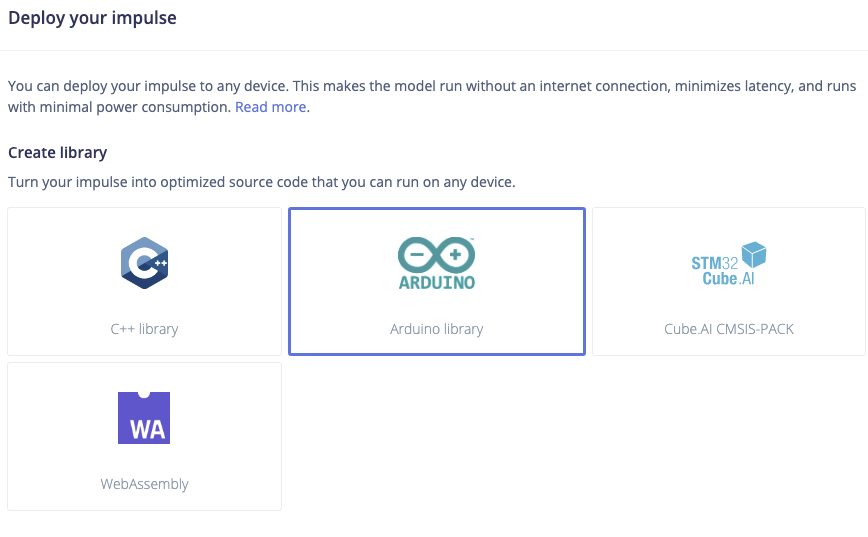 Import the library within the Arduino IDE, and open the microphone continuous example sketch. We made a few modifications to this example sketch to interact with the LS200 dev kit: we added a new UART link and we transmit classification results only if the prediction score is above 0.8.

Connect with the Lacuna Space dashboard by following the instructions on our application’s GitHub ReadMe. By using a web tracker you can determine when the next good time a Lacuna Space satellite will be flying in your location, then you can receive the signal through your The Things Network application and view the inferencing results on the bird call classification:

No Lacuna Space development kit yet? No problem! You can already start building and verifying your ML models on the Arduino Nano 33 BLE Sense or one of our other development kits, test it out with your local LoRaWAN network (by pairing it with a LoRa radio or LoRa module) and switch over to the Lacuna satellites when you get your kit.