For more than a century, advances in technology, machinery and automation have oftentimes replaced humans as a means to accomplish tasks. In this podcast, Rob Tiffany tackles the unsavory topic of workforce reduction as certain tasks have evolved from manual to mobile to IoT.

Listen to the Podcast 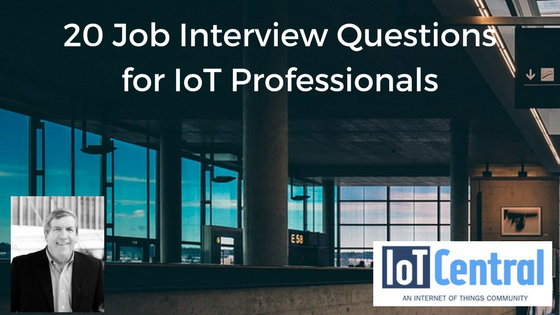 Bill McCabe knows everyone. He has to. He’s a thought leader in IoT, with a particular focus on recruiting. He’s authored dozens of articles on all things IoT and recruitment, and has placed a number of IoT professionals at organizations big and small. We wanted to know in particular, for the IoT job seeker, what are the top 20 questions they should be prepared to answer in their interview. Below is what Bill shared.

We have 10 more important questions for you to consider in your IoT interview. To see the rest of the questions, become a member of IoT Central (it’s free!) and click here.

Did you get a great, interesting or hard IoT related question during your interview? If so, let us know and we’ll add it to this list. Leave your question in the comments section or email us.

Here are eight articles from long-time IoT Central contributor Bill McCabe that will help you find, recruit and advance your organization and careers in IoT.

How to Nail your Internet of Things Interview

5 questions You Should Ask Your IOT Candidates Before Hiring Them

IOT Job Market/ Who is getting hired and Why?

The 5 Point Plan for IOT Recruitment