A scientist from Russia has developed a new neural network architecture and tested its learning ability on the recognition of handwritten digits. The intelligence of the network was amplified by chaos, and the classification accuracy reached 96.3%. The network can be used in microcontrollers with a small amount of RAM and embedded in such household items as shoes or refrigerators, making them 'smart.' The study was published in Electronics.

Today, the search for new neural networks that can operate on microcontrollers with a small amount of random access memory (RAM) is of particular importance. For comparison, in ordinary modern computers, random access memory is calculated in gigabytes. Although microcontrollers possess significantly less processing power than laptops and smartphones, they are smaller and can be interfaced with household items. Smart doors, refrigerators, shoes, glasses, kettles and coffee makers create the foundation for so-called ambient intelligece. The term denotes an environment of interconnected smart devices.

An example of ambient intelligence is a smart home. The devices with limited memory are not able to store a large number of keys for secure data transfer and arrays of neural network settings. It prevents the introduction of artificial intelligence into Internet of Things devices, as they lack the required computing power. However, artificial intelligence would allow smart devices to spend less time on analysis and decision-making, better understand a user and assist them in a friendly manner. Therefore, many new opportunities can arise in the creation of environmental intelligence, for example, in the field of health care.

Andrei Velichko from Petrozavodsk State University, Russia, has created a new neural network architecture that allows efficient use of small volumes of RAM and opens the opportunities for the introduction of low-power devices to the Internet of Things. The network, called LogNNet, is a feed-forward neural network in which the signals are directed exclusively from input to output. Its uses deterministic chaotic filters for the incoming signals. The system randomly mixes the input information, but at the same time extracts valuable data from the information that are invisible initially. A similar mechanism is used by reservoir neural networks. To generate chaos, a simple logistic mapping equation is applied, where the next value is calculated based on the previous one. The equation is commonly used in population biology and as an example of a simple equation for calculating a sequence of chaotic values. In this way, the simple equation stores an infinite set of random numbers calculated by the processor, and the network architecture uses them and consumes less RAM. 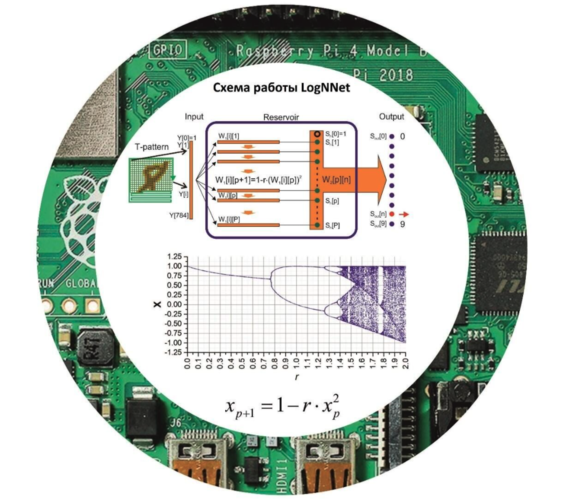 The scientist tested his neural network on handwritten digit recognition from the MNIST database, which is considered the standard for training neural networks to recognize images. The database contains more than 70,000 handwritten digits. Sixty-thousand of these digits are intended for training the neural network, and another 10,000 for network testing. The more neurons and chaos in the network, the better it recognized images. The maximum accuracy achieved by the network is 96.3%, while the developed architecture uses no more than 29 KB of RAM. In addition, LogNNet demonstrated promising results using very small RAM sizes, in the range of 1-2kB. A miniature controller, Atmega328, can be embedded into a smart door or even a smart insole, has approximately the same amount of memory.

"Thanks to this development, new opportunities for the Internet of Things are opening up, as any device equipped with a low-power miniature controller can be powered with artificial intelligence. In this way, a path is opened for intelligent processing of information on peripheral devices without sending data to cloud services, and it improves the operation of, for example, a smart home. This is an important contribution to the development of IoT technologies, which are actively researched by the scientists of Petrozavodsk State University. In addition, the research outlines an alternative way to investigate the influence of chaos on artificial intelligence," said Andrei Velichko.

Views: 503
E-mail me when people leave their comments –
Follow