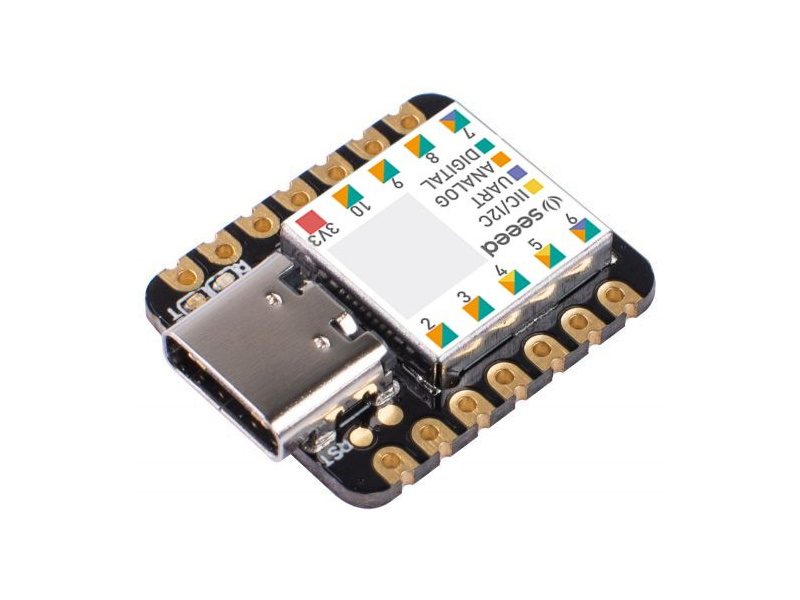 As small as a postage stamp, the Seeeduino XIAO boasts a 32-bit Arm Cortex-M0+ processor running at 48 MHz with 256 KB of flash memory and 32 KB of SRAM.

A couple of months ago, I penned a column, The Worm Turns, in which I revealed that — although I’d been bravely fighting my urges — my will had crumbled and I had decided to create a display comprising a 12 x 12 = 144 array of ping pong balls, each illuminated with a tricolor WS2818 LED (a.k.a. a NeoPixel). First, I found a pack of 144 ping pong balls on Amazon for only $11. I ordered two cartons because I knew I would need some spares. Of course, this immediately tempted me to increase the size of my array to 15 = 15 = 225 ping pong balls, but I’d already ordered 150 NeoPixels in the form of five meters of 30 pixels/meter strips from Adafruit, so I decided to stick with the original plan, which we will call “Plan A” so no one gets confused.

Thank goodness I restrained myself, because the 12 x 12 array is proving to be a lot more work than I expected — a 15 x 15 array would have brought me to my knees.

The next step was to build a 2-ball prototype because I wanted to see whether it was best to attach the NeoPixel to the outside of the ball (the fast-and-easy option) or inside the ball (the slow-and-painful alternative). Although you can’t see it from the picture or from this video, there is a slight but noticeable difference in the real-world, and one method is indeed better than the other — can you guess which one? 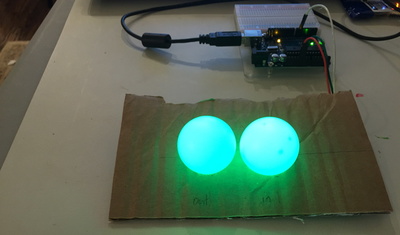 Have you ever tried to drill 3/8” holes into 144 ping pong balls? Me neither. Over the years, I’ve learned a thing or two, and one of the things I’ve learned is that drilling holes in ping pong balls always ends in tears. Thus, I ended up cutting these holes using a small pair of curved nail scissors (there’s one long evening I’ll never see again).

The reason for using the strips is that this is the cheapest way to purchase NeoPixels with associated capacitors in the easiest-to-use form. Unfortunately, the ball-to-ball spacing (43 mm) on the board is greater than the pixel-to-pixel spacing (33 mm) on the strip. This means chopping the strip into segments, attaching each segment to its associated ping pong ball, and then connecting adjacent segments together using three wires. So, 144 x 3 = 432 short wires to strip and solder. Do you have any idea how long this takes? I do! 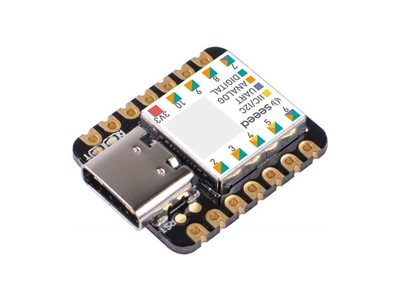 The Seeeduino XIAO is the size of a small postage stamp (Click image to see a larger version — Image source: Seeed Studio)

Now, you may have noticed that I was driving my 2-ball prototype with an Arduino Uno, but this is too large to be used in my array. In the past, I would have been tempted to use an Arduino Nano, which is reasonably small and not-too-expensive. On the other hand, the fact that this is an 8-bit processor running at only 16 MHz with only 32 KB of flash memory and only 2 KB of SRAM would limit the effects I could achieve.

Sometimes (rarely) the fates decide to roll the dice in one’s favor. In this case, while I was pondering which processor to employ, the folks from Seeed Studio contacted me to tell me about their Seeeduino XIAO.

OMG! This little rapscallion — which is only the size of a small postage stamp and costs only $5 — is awesome! In addition to a 32-bit Arm Cortex-M0+ processor running at 48 MHz, this bodacious beauty boasts 256 KB of flash memory and 32 KB of SRAM.

As an aside, it’s important to note is that the Seeeduino XIAO’s programming connector is USB Type-C, which means you’re going to need a USB-A to USB Type-C cable. 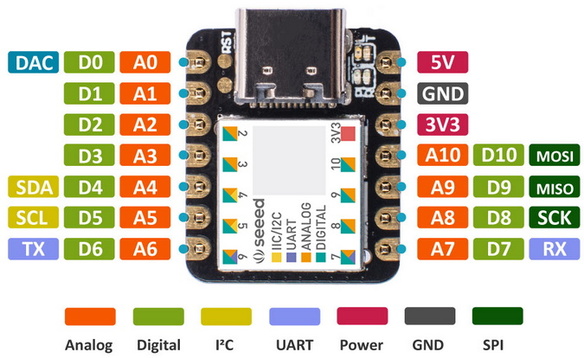 In addition to its power and ground pins, the Seeeduino XIAO has 11 data pins, each of which can act as an analog input or a digital input/output (I/O). Furthermore, one of these pins can by driven by an internal digital-to-analog converter (DAC) and act as a true analog output, while the other pins can be used to provide I2C, SPI, and UART interfaces.

Sad to relate, there is one small fly in the soup or a large elephant in the room (I’m feeling generous today, so I’ll let you pick the metaphor you prefer). The problem is that, although it can be powered with the same 5 V supply as the NeoPixels, the Seeeduino XIAO’s I/O pins use a 3.3 V interface, but the NeoPixels require 5 V data signals, so we need some way to convert between the two.

In the past, I would probably have used a full-up bidirectional logic level converter, like the 4-channel BOB (breakout board) from SparkFun, but I only need a single unidirectional signal, so this seems a bit of overkill.

Happily, I recently ran across an awesome hack on Hackaday.com that provides a simple solution requiring only a single general-purpose IN4001 diode.

Actually, if the truth be told, there is some “wriggle room” here, and the 3.3 V signal from the XIAO might work, but are we the sort of people for whom “might” is good enough? Of course we aren’t!

I’m currently about half of the way through wiring everything up. I cannot wait to see my array light up for the first time. Once everything is up and running, I will return to regale you with more details. Until that frabjous day, I will delight to hear your comments, questions, and suggestions.