Those who regularly read my articles know that I like movies and TV series. Just remember my article "About IoT Platforms, Super Powers Methodology, Superheroes and Supervillains".

This time my article is dedicated to the two trilogies: Jurassic Park and Jurassic World (the latter still pending the third movie).

Have not passed millions of years since the appearance of the first telemetry species and their evolved cousins of Machine to Machine (M2M.) But the tempo in technology is measured differently. The unit of time here has to do with Gartner Hype Cycle. For Gartner the technologies pass quickly from Innovation Trigger to Productivity. Companies that want to appear in Gartner´s  Magic Quadrants have to adopt successfully these technologies or are condemned to  disappear.

Large companies that have been in the IT world for more than 15 years seem like dinosaurs and they themselves are afraid of disappearing because of a meteorite (IoT metaphorically).

In this article I present some technology companies that we could consider as dinosaurs and that are undergoing a cloning (transformation) to adapt to the new world of the Internet of Things (IoT), Artificial Intelligence(AI) or Blockchain.

As usual in this type of articles, the included companies and the classification is subjective. Therefore, not all dinosaurs are represented (47 species of cloned animals have been portrayed in the novels and films) nor all companies can feel be represented by the dinosaur that I have chosen for them.

Welcome to my Jurassic World of IoT. 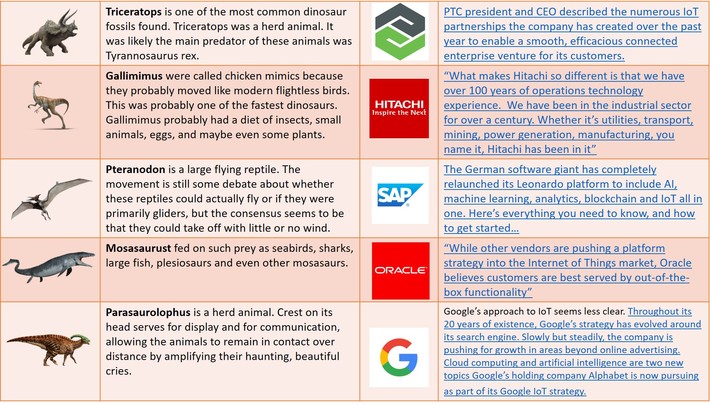 The threats to these cloned dinosaurs are constant. Despite its size and strength many predators lurk to take down these giants (Uptake digital safe package over GE Digital).

Some species go in packs (Google and Ayla Networks or Microsoft and Electric Imp) to survive and others seek alliances with other cousins giants (Rockwell to take $1 billion stake in software maker PTC) the best way to reign in its territory.

There are also dinosaurs in the WestWorld of the Telcos and in the world of Industrial companies that are adapting or cloning, but that is another story.

Your comments and suggestions can vary my Jurassic World table of the IoT.