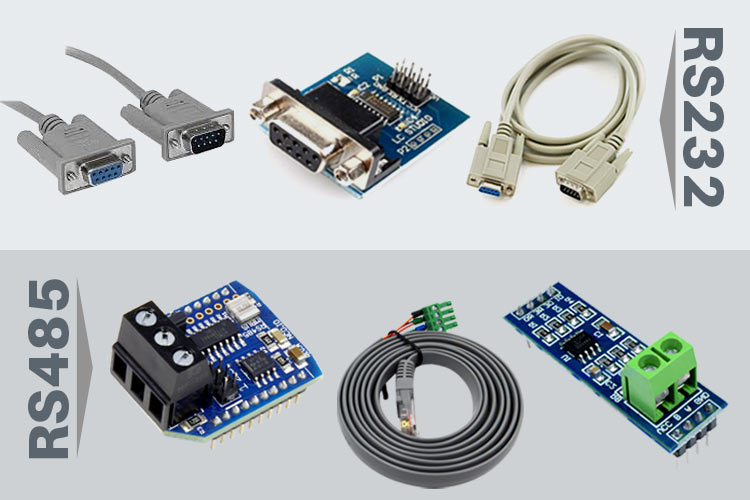 What is the RS232 protocol?

The RS232 interface is a data transfer protocol designed to control serial communications. It is used to organize the flow of data from a data terminal equipment (DTE), such as a terminal or transmitter, to a receiver or other type of data communication equipment (DCE).

The distance between devices directly affects the speed of communication. Serial communication can be established in full or half duplex mode. Full duplex allows simultaneous sending and receiving of data by using different wires for transmission and receive. In a half-duplex implementation, a single line is used to send and receive data, resulting in more limited operation. It is possible to set up a half-duplex to send or receive data, but not both at the same time.

What is the RS485 protocol?

The most widely used serial interface in the industry is the RS485 or EIA-485 protocol. It has major advantages over the RS232 interface. By using a multipoint topology, multiple receivers and transmitters can be connected. Data transmission is accomplished using differential signals to improve consistency.

There are two types of RS485 communication:

What is the difference between RS232 and RS485 serial ports?

RS232 and RS485 are two electrical transmission standards that already existed before the introduction of personal computers. They were used in interfaces that supported serial communication between computers and peripheral devices. Although they are both used to allow serial data transfer, there are some differences between the RS232 and RS485 protocols. Let's take a look at the differences between these protocols.

The main differences between the RS232 and RS485 serial ports are:

The number of wires: RS232 cables usually consist of 9 different wires, although in some connectors 25 wires are used. Each wire has a different purpose in data transmission. RS485 cables have only three wires, two for data transmission and one for ground.

Where is the serial data transfer protocol used?

Serial data transfer using the RS232 or RS485 protocols is no longer the standard for consumer computers or electronic peripherals. It is gradually being replaced by USB and other protocols. Serial transmission is still widely used in industrial monitoring and embedded systems and can be used with converters on USB-equipped computers.

The RS232 serial port allows direct connection to industrial devices without software assistance. Many of the industrial sensors and monitors used in the Industrial Internet of Things use serial communication. Serial data communication is also widely used in scientific and medical devices. RS485 protocol has been widely used in smart weighing, smart traffic, and CCTV (closed-circuit television) cameras.