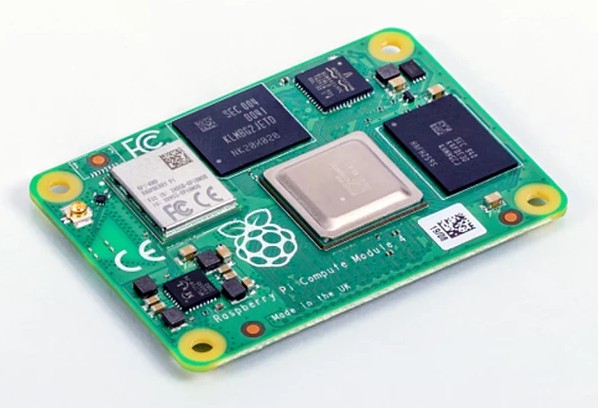 Ever wanted the power of the all new Raspberry Pi 4 Single Board Computer, but in a smaller form factor? With more options to expand the I/Os and its functions? Well, The Raspberry Pi Compute Module 4 (a.k.a. CM4) got you covered! In this article, we’ll be taking a deep dive into the all-new CM4, see what’s new and how different the latest iteration is from its predecessor, CM3.

Introduction - The System on Module Architecture

The CM4 can be described as a ‘stripped-down’ version of the Raspberry Pi 4 Model B, which contains the same processor, memory, eMMC flash memory and the power regulation circuitry built-in. The CM4 looks almost like a breakout board with two connectors underneath, hence the name “System on Module (SoM)”. However, what differs the CM4 (all compute modules for that matter) from the regular Raspberry Pi 4 is that the CM4 does not come equipped with any hardware I/O ports such as USB, Ethernet and HDMI, but offers access to all the useful I/O pins of the cpu to be utilized to connect external peripherals that the designers include in their circuit designs. This offers the ultimate freedom to the designers and developers to use the computing power of the Raspberry Pi 4, while reducing the overall cost of their designs by only having to use what’s necessary in their designs.

The key difference with the CM4, at first glance, is the form factor of the module. The previous versions, including the CM3 were designed to have the DDR2-SODIMM (mechanically compatible) form factor which looked like a laptop RAM stick. The successor, CM4 comes in a smaller form factor, with 2x 100-pin High-Density connector which can be ‘popped-on’ to the receiving board.

The CM4 comes in 32 different variants which has varying Flash and RAM options and optional wireless connectivity. Similar to the predecessors, there is also a CM4Lite version, which does not come with a built-in eMMC memory, reducing the cost of the module to a minimum of $25. However, all the variants of CM4 are equipped with following key features:

The CM4 can be integrated into end products, designed and prototyped using the full-size Raspberry Pi 4 SBC. This allows the removal of unused ports, peripherals and components which reduces the overall cost and complexity. Therefore application ideas are virtually limitless and range all the way from DIY projects such as the PiBoy to industrial IoT designs such as integrated home automation systems, small scale hosting servers, data exchange hubs and portable electronics which require the processing power offered by the CM4, all while maintaining the smaller form factor and power consumption. Compute Module Clusters such as the Turing Pi 2, which harnesses the power of multiple Compute Modules are also an option with this powerful, yet small System on Module, the Raspberry Pi CM4.

How Can I Use Upswift Solutions On My Compute Module 4 Based Design?

Upswift offers hassle-free management solutions for all Linux-based embedded systems (CM4 included), by providing you a one-click solution to monitor, control and manage all your connected devices, from one place.