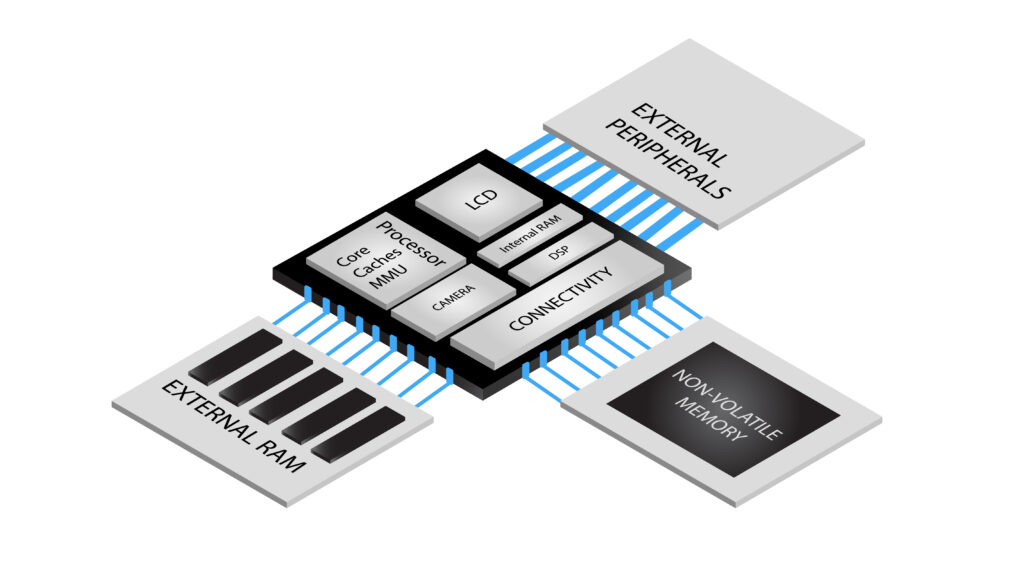 A System on Chip (SoC), is essentially an integrated circuit that takes a single platform and integrates an entire computer system onto it. It combines the power of the CPU with other components that it needs to perform and execute its functions. It is in charge of using the other hardware and running your software. The main advantage of SoC includes lower latency and power saving.

It is made of various building blocks:

An SoC uses RAM to store temporary data during and after bootstrap. It is the memory an embedded system uses during regular operation.

In an Embedded system or single-board computer, it is the SD card. In other cases, it can be a NAND, NOR, or SPI Data flash memory. It is the source of data the SoC reads and stores all the software components needed for the system to work.

An SoC must have external interfaces for standard communication protocols such as USB, Ethernet, and HDMI. It also includes wireless technology protocols of Wi-Fi and Bluetooth. First of all, we introduce the boot chain which is the series of actions that happens when an SoC is powered up.

Boot ROM: It is a piece of code stored in the ROM which is executed by the booting core when it is powered-on. This code contains instructions for the configuration of SoC to allow it to execute applications. The configurations performed by Boot ROM include initialization of the core’s register and stack pointer, enablement of caches and line buffers, programming of interrupt service routine, clock configuration.

In the first-stage bootloader performs the following

It copies the Boot ROM into the SoC’s internal RAM. Must be tiny enough to fit that memory usually well under 100kB. It initializes the External RAM and the SoC’s external memory interface, as well as other peripherals that may be of interest (e.g. disable watchdog timers). Once done, it executes the next stage, depending on the context, which could be called MLO, SPL, or else.

This is the main bootloader and can be 10 times bigger than the 1st stage, it completes the initialization of the relevant peripherals.

To put the kernel in context, they can be interpreted as a Linux machine as having 3 layers:

Init and rootfs – init is the first non-Kernel task to be run, and has PID 1. It initializes everything needed to use the system. In production embedded systems, it also starts the main application. In such systems, it is either BusyBox or a custom-crafted application.