There is no doubt about the capability of IoT the way it is spearheading in the smart technology market by providing innovative solutions to various industries.

Advanced industries, smart vehicles, smarter cities, smart home and more have already under the influence of the IoT touch. However, IoT in farming is the new trend that has geared up for a while. And why not?

Do you know the global population is growing at a rapid speed. It is about to touch 9.6 billion by 2050. And to feed this much of the population there has to be an innovative way to compensate this need. IoT comes as a silver bullet solution for it.

The way IoT is helping out farmers and farm owners is commanding. The upcoming years are expecting more inventions in farming by different IoT applications.

This article explains the different ways of smart farming and effective applications of IoT in smart farming.

Basically, this is done through installing or using some sensors, smart devices, robots, drones, autonomous vehicles, and so on. By doing so farming can be made so systematic and well maintained thereby raising livestock and growing crops in a smart way.

Numerous organizations are leveraging this technology on ultramodern agronomic solutions due to the popularity of precision agriculture.

The soil moisture probe technology is an amazing example of IoT in smart farming. It provides complete in-season local agronomy support, and recommendation to optimize water use efficiency.

Technology in farming is changing for a good and what better example would it be than Agriculture Drones. Today, agriculture is the leading industry to integrate drones for better results.

Precision Hawk is a company that uses drones for collecting valuable information via a series of sensors. Mostly these sensors are used for imaging, mapping, and surveying of agricultural land.

Drones are used to do in-flight monitoring and observations. The farmers can easily access by entering details of the field they want to survey and select the altitude or ground resolutions.

From the information of the drone, we can draw insights regarding the plant’s health indices, plan counting and yield prediction, and plant measurement. We pressure mapping, drainage mapping, nitrogen content, scouting report and so on.

Wireless IoT applications are used by the large farm owners to gather the data regarding the location, well-being, and health of their cattle.
This data helps them in identifying sick animals to separate them from the herd thereby preventing the spread of disease. It also lowers the cost off labors as it locates their cattle with the IoT based sensors.

There is a company called JMB North America which offers cow monitoring solution to cattle producers. One solutions let owners of the production company to monitor if the cow is pregnant or not.

Greenhouse farming is a method which helps in enhancing the yield of fruits, veggies, and crops. Greenhouses control regulate the environmental parameters through manual intervention results in production loss, energy loss, and labor cost. These methods are less effective.

With IoT, you can build a smart greenhouse which will monitor as well as controls the climate reducing the need for manual intervention.

Different sensors that measure environmental parameters according to plant are used for controlling the environment in the smart greenhouse. Additionally, we can create a cloud server for remote access when it is connected using IoT.

The sensors used in IoT provide data on the light levels, pressure, humidity, and temperature. It can control the actuators to open a window, turn on/off lights, controlling a heater, all connected through a Wifi signal.

Farmers and rancher are relieved to have an IoT agricultural application making it possible to-gather meaning full information. Large landowners should understand the potential of the IoT market for agricultural.

If you are willing to integrate IoT in smart farming, you should approach for Leading IoT App Development Company and leverage the benefits of IoT. 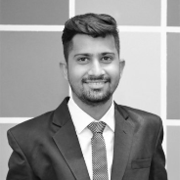 Mayur is the CTO of Excellent WebWorld and a Web &amp; Mobile App development Company. He is updated with all the latest trends in the mobile app technology field. He writes blogs that are helpful for businesses to implement technology in the operations.